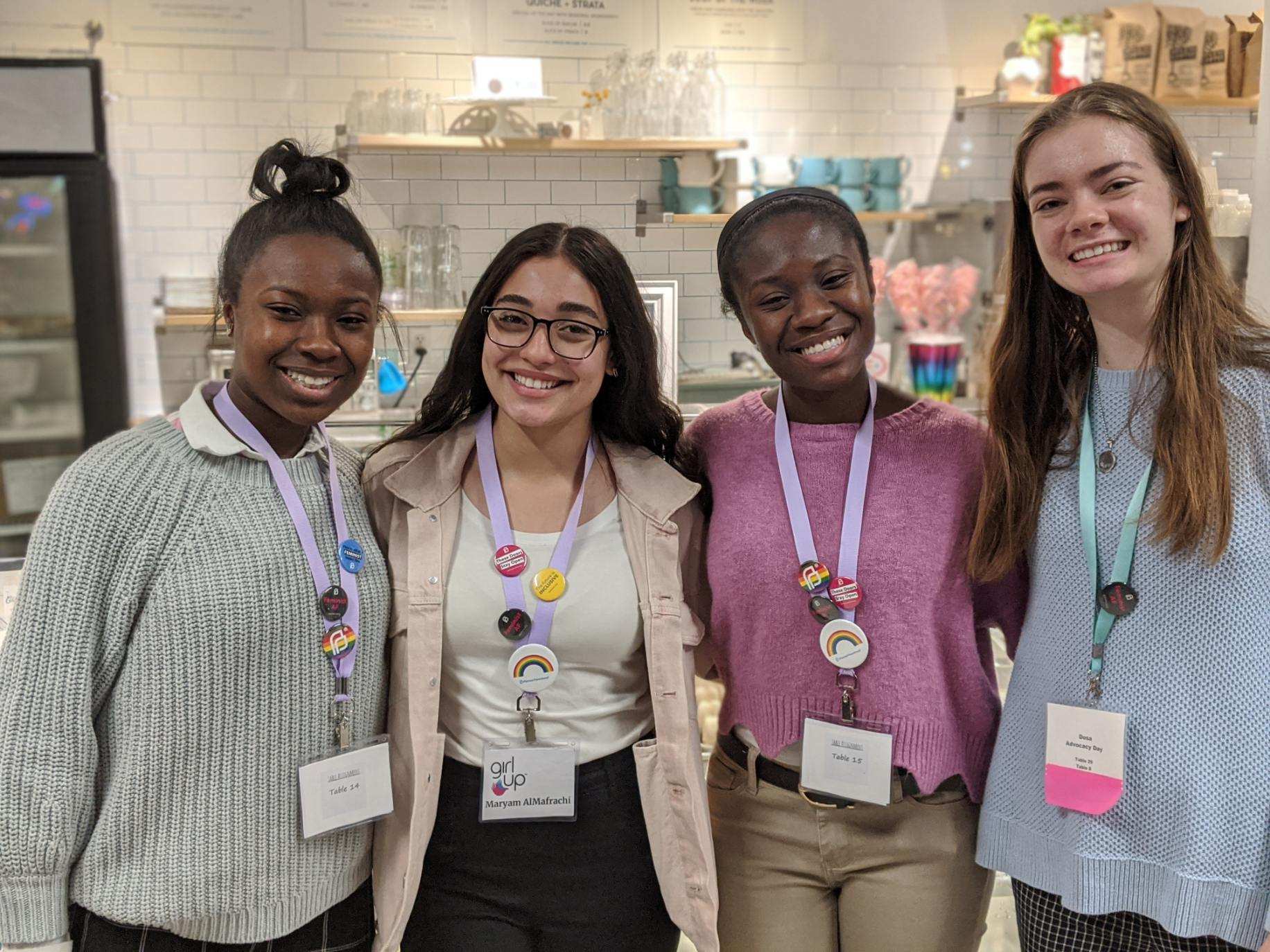 Amina Salahou, Maryam Almafrachi, Anisa Salahou, and Martine Dosa are inspiring leaders both within their school community at Nottingham High School, and within the greater Syracuse community. They are all members and leaders of a Club of the United Nations’ Girl Up campaign. This international campaign amplifies gender equality using the tenants of advocacy, fundraising, storytelling, and organizing. As a Club, they support Girl Up’s global work while also applying the four tenants locally.

As for their inspiration, each of them have their own unique experiences. Regarding the Club’s founding, Maryam, Amina, and Anisa learned about Girl Up through their English teacher at H.W. Smith School. They began the first Girl Up club in the Syracuse City School District at H.W. Smith and then founded the Nottingham High School Girl Up club during their freshman year. For Martine specifically, she states that she “really fell in love with the community that existed within Girl Up. Having friends like my three co-leads in the Club definitely drew me in.” Their service efforts are based on the advocacy and organizing that they see needs to be done within the community. For example, in March of 2020, when they were about to go home due to lockdown, they quickly gathered all the menstrual products and pencil pouches they could find to send home to their peers who were in need.

Martine states that she has “really learned the importance of coalition-building” through this experience. Some of their most successful events and initiatives have been organized in collaboration with community organizations including Planned Parenthood of Central and Western New York, Layla’s Got You, Cafe Sankofa, the Always brand, and Syracuse RISE. Logistically, they believe it’s important to collaborate to reach a larger audience of people who may benefit from their work. However, they also believe it’s deeply meaningful because they are able to exchange ideas and strategies in a gender equitable, organizing space. They have certainly learned many important lessons and have built great relationships with other community members in this way.

In regards to where they find support while they work toward their accomplishments, they enthusiastically give credit to their surrounding community. They mainly organize on social media and have been able to gain amazing support that way. Last spring, for instance, they hosted a team for Girl Up’s Virtual 5K fundraiser to help engage the community while also being physically distant. In less than two weeks their local community at Nottingham came together to raise over $2000 for Girl Up’s international work. “Of course,” they remind us, “it should also be noted that support doesn’t just mean giving back monetarily.” They claim that the most important type of support is the amount of love they’ve received in conversations and messages with members of the community.

As a Club at Nottingham, they would really love to focus on expanding their membership in the future as schools move closer to fully re-opening. They’ve consistently held weekly virtual meetings this year and have had some freshmen and sophomores join them along the way. They are very excited to be able to be together again! Girl Up has a really unique opportunity to engage in an international movement at a local level and they would love to see others join them in their work.

When asked if they had any advice for other youth looking to make a difference in their community, they suggest listening carefully to organizers and to watch the work already being done in the community. “There’s so much good happening in Syracuse, even if it’s sometimes overshadowed by not-so-good headlines.” They’ve found it much more beneficial to listen and learn through experienced organizers than try to start something completely new. That being said, they assert, “if there’s a need you recognize that’s not being met anywhere you can see, don’t be afraid to do something about it! We are a powerful generation not waiting for our high school or college diplomas to affect change in our world!”